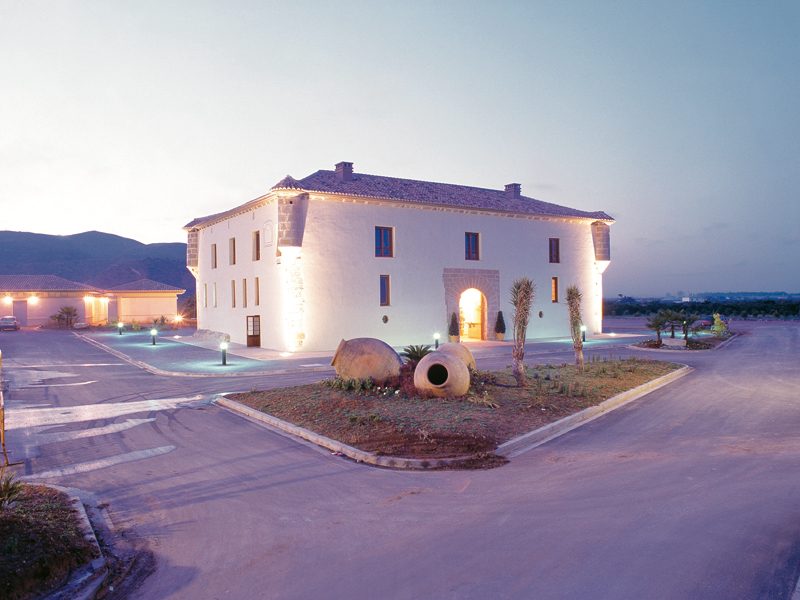 Linked to the Borja family and to the nobility, it has been visited even by the Empress Margaret of Austria.

L’Alqueria del Duc: it is located at the foot of el Castell de Bairén, in the territory called Font de Montaner. There is a car park with free spots next to l’Alqueria del Duc but the access road is very narrow and presents problems if we run into another vehicle in the front. It is recommended to go on foot from el Grau de Gandia and enjoy the walk. In addition it is possible to access by bicycle or walk from Gandia passing through the industrial estate Alcodar (below the train tracks near the fire station).

Nestled in one of the most beautiful surroundings of the region, on the slopes of el Castell de Bairén and next to la marjal (the marsh) and springs, at the time it had luxurious halls and decorations, as well as small boats to navigate through its pond

It is a fortress farmhouse with all its dependencies inside the thick walls that make it up. The date of its construction is uncertain, but it must be around the 15th century, and it is possible that it was built on an earlier tower in the northwest corner there are remains of a demolished brick tower that contrasts with the rest of the set of mortar and stone.

The farmhouse had to have a military character at the outset as an advanced guard post where the change of the guard of the coastal patrols would take place before the frequent incursions of pirates and berbers. Next to it there are remains of a necropolis of the Visigoth era. In 1590, it was acquired by the minor of the children of Francesc de Borja, Alfons de Borja i Castro, who turned it into a stately fortress and hunting centre, with orchards around.

Nowadays it is the headquarters of el Centre de Desenvolupament Turístic (CdT) of la Generalitat Valenciana and it operates as a hotel-school.

Next to l’Alqueria del Duc, there is l’Ullal de l’Estany, one of the springs that nourish la marjal de Gandia (the Gandia marsh). Its fresh waters come from the nearby mountains and they emerge from the subsoil. L’Ullal de l’Estany is an example of the biodiversity of the marshes, coastal wetlands whose ecological importance has been recognized by various international organisms. The one of Gandia is part of the water system of la Marjal de la Safor (the Marsh of la Safor), one of which is conserved on the Valencian coast.

Next to l’Ullal, l’Aula de la Natura is located, the interpretation centre of the marsh, from where trails leave from to cross the area. Here is also the headquarters of el Centre Espanyol d’Aiguamolls.